The third month of picture taking and there was much fun to be had.  Many events surrounding Mae's special day turning three including taking pictures again in mommy's wedding dress.   Mommy herself got to venture out and away from the kids this month for a girl's get away!  So exciting and I was able to capture this night shot!   All in all a great month and a good month for photo taking! 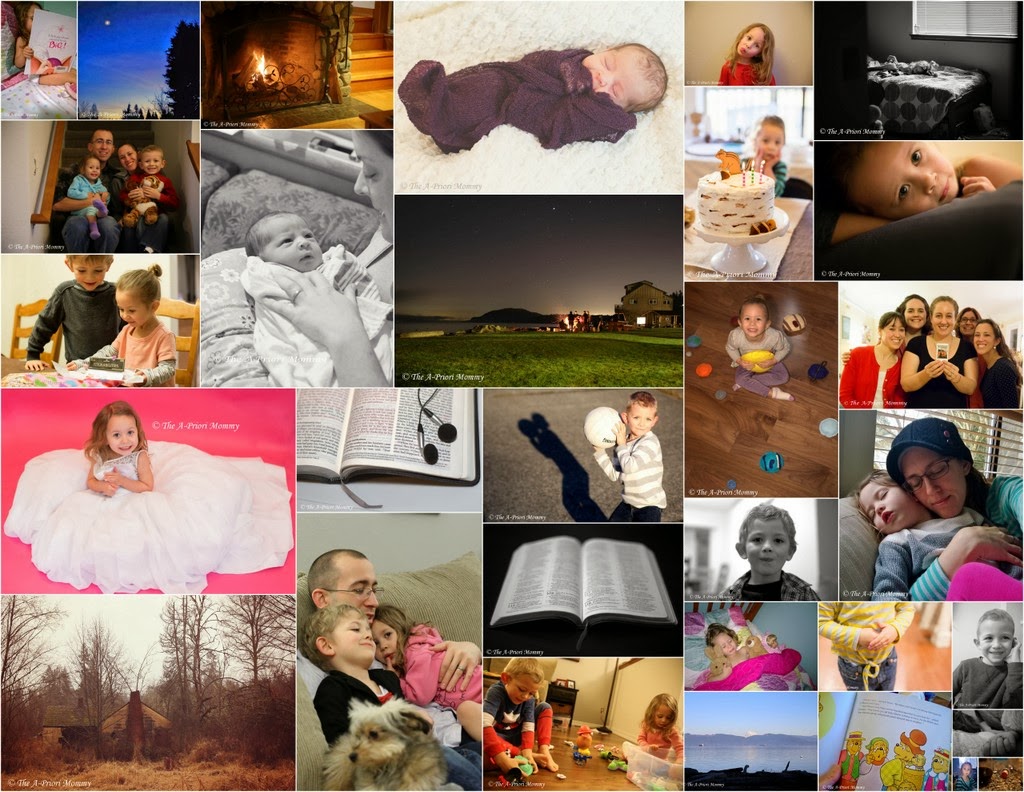 Email ThisBlogThis!Share to TwitterShare to FacebookShare to Pinterest
Labels: 365, photography 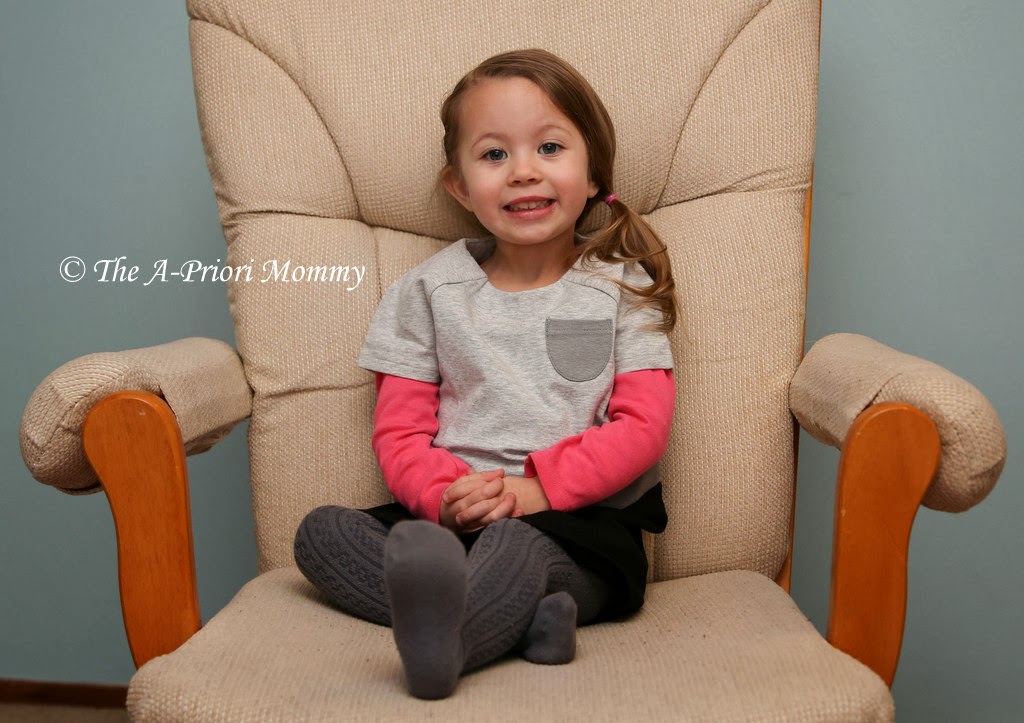 Favorite things of M's quirkiness in the last few months have included:  she refers to Gatorade as Alligator (see convo below,)  she loves to hear stories about chipmunks - you'll be hard pressed right not to get away with a story that she doesn't at least throw a chipmunk into - but often she'd prefer the main staring character to be a chipmunk (we have no idea where this fascination came from.)    She loves for me to sing Somewhere Over the Rainbow to her at bedtime, she doesn't seem to have a favorite book - and the girl can't help but interrupt every 3 words with something to say (related or otherwise) during a story.   Summertime seems to be when the end of naps happened (whimper!)

Mae and sleep in these last six months has been great - better than her brother if I am being honest!   She might have a few off nights where she pops up and refuses to go to sleep right away, but after the initial bedtime routine (that still requires mommy's tummy to be touched) she is happy to go to bed and rarely wakes up.

The biggest change since the last report has been POTTY TRAINING!!!  Yes, little Mae in October began her journey toward bathroom independence.   She did great and after a week or so she got to have the ceremonial jaunt to the store to purchase her underwear! And while she officially was three for 5 days - I would also like to say that she was pull-up free at night by January 15th! No accidents yet at nighttime.   Mae Mae is officially potty trained!!   This mommy couldn't be more ecstatic. 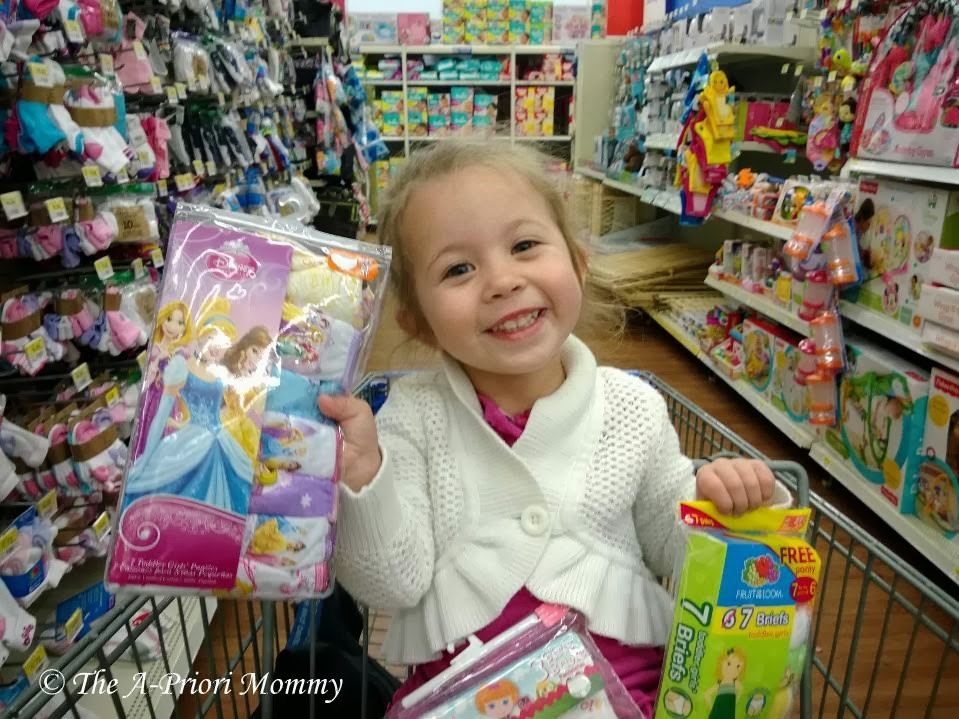 Mae is doing so well on language and talking.  She recognizes most of the alphabet - and honestly she probably knows it all, but she's too stubborn to show me.   She can count to 12 pretty easily and can count objects up to about six and then she just starts saying random numbers.    She loves to play on her leappad that we got her.  She is a huge fan of Doc McStuffins, chipmunks as mentioned, and princesses.    She's enjoying Calico Critters a lot and loves to build (and destroy) things with blocks.  She still is 100% attached to her bear and takes it everywhere - and it gets into the same antics and excitement that she does.

You see once upon a time on Halloween when Mae was having quiet time - she was overly quiet for a long time - I assumed she had fallen asleep... but then a long time went on past brother's quiet time and I decided to look in on her to see if she was getting in a good snooze... upon entering the room I found her like this... 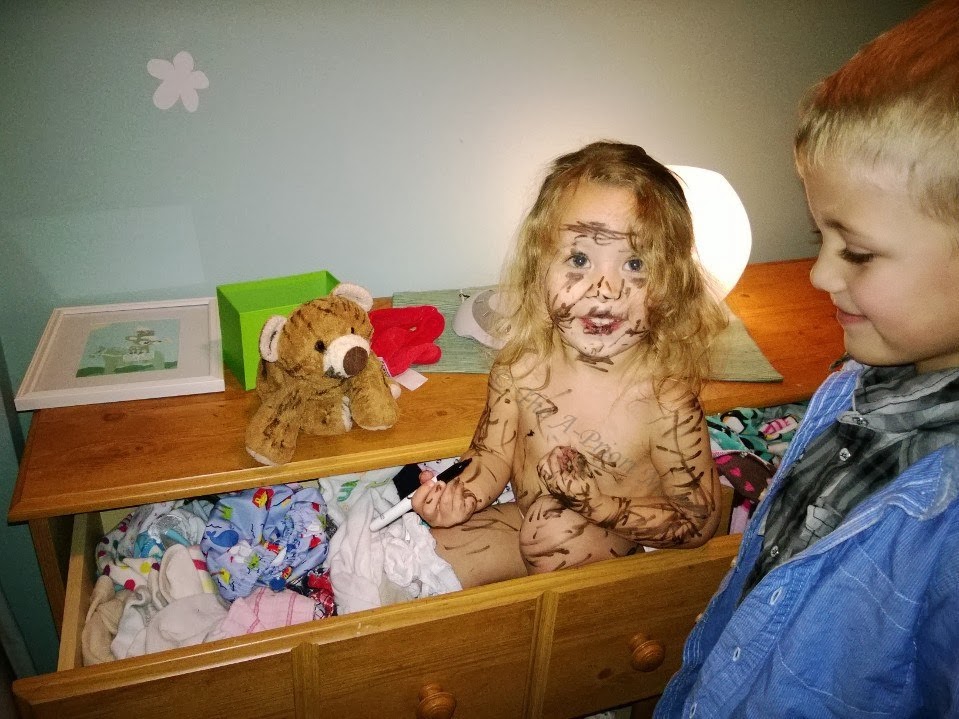 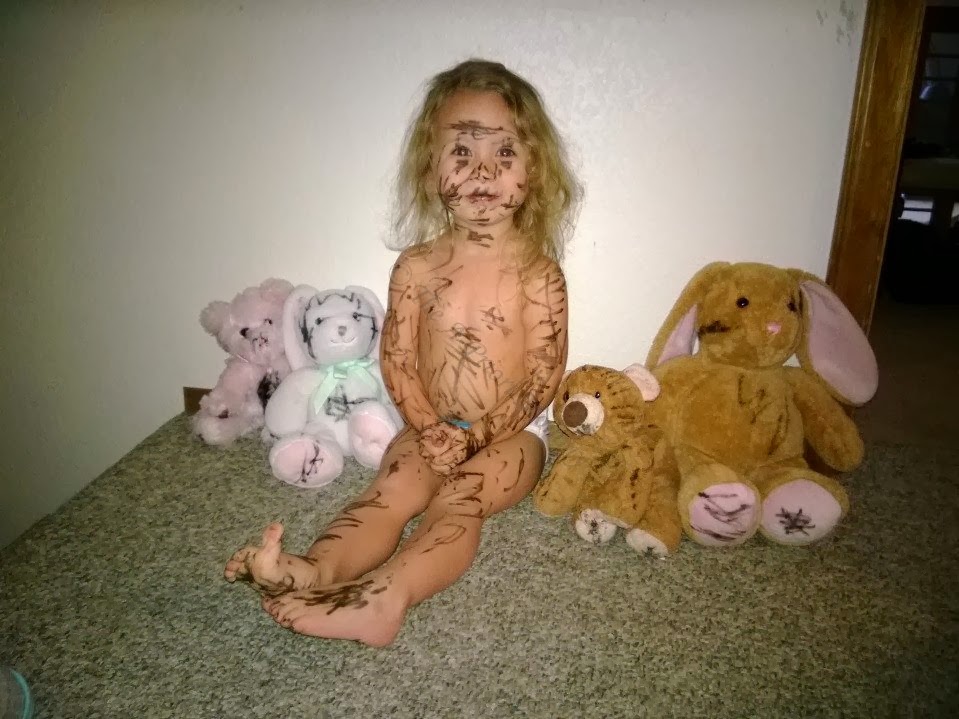 Yes, at some point in her quiet time she had managed to sneak across the hall into my room and found (THANK GOD!) a dry erase marker.    She went to town and every inch of her body was covered... every last bit...  I'm not exaggerating.    I have to give her kudos though her face design was very nicely done - she explained that she wanted to be a tiger for Halloween and had given herself and her bear (and other friends) tiger stripes.   Along with her mirror,  her dora doll, nearly every FP Little Person...  Brother was a big help and went to work with some wipes and cleaned up all of the plastic items that were drawn on - the easiest items to clean.   Never mind on on top of it all I found her IN her sock drawer (something I hadn't seen her attempt before, nor is she sanctioned for such locations!)     Mae got a bath, the neighbor loaned me her rubbing alcohol and I got underway scrubbing stuffed animals to get them clean.   While dry erase marker comes of plastic and people pretty easily - stuffed animals - not so much!     Bear and her bunny both have some scars and the other two friends I didn't even really try to get clean.     Upon finding her she said that it made her happy!    It was really impossible to be mad at her.  ;)

There is so much I could elaborate on and perhaps I'll come back and add more to this post - but I feel Mae can say it best.  ;)   So below are some conversations and then her debut interview (which I did do on her birthday, I'm just woefully behind on the blogging!) I memorialize conversations and silly things that she says on the social networking site - so a few gems and musing that I captured this past year I've jotted down here.
December 3, 2013
Mae was awake when I went to check on her just now, so I snuggled into bed and let her touch my tummy (her comfort thing) and I ran my fingers through her hair and laid there for a while and then gave her a hug and a kiss and tucked her in and said good night and she whispered as she was falling asleep "You're a good mom." So sweet!

August 16, 2013
A: There was a scary noise downstairs!
M: Don't worry brother - Jesus will protect you with his powers.
A: Sister come down with me.
M: I'm not Jesus! I'm not going down there!

April 2, 2013
Scene: Aiden trying to get one egg from Mae's Easter basket hooked on her arm.
Mae: NO IT'S MINE! NO, BRUDER! NOoOOoooOOoo!!!
Me: M, who does everything belong to?
Mae: Jesus
Me: And what do you think he'd want you to do?
Mae: Hug my heart.
Me: ::giggle:: and what else might he want you to do?
Mae: ::SIGH:: share with bruder and be kind.
Me: It's true! Is that what you want to do? (Fully expected a confidant "NO!")
Mae: (Gives brother her whole Easter basket, smiles, and skips off to something else.) 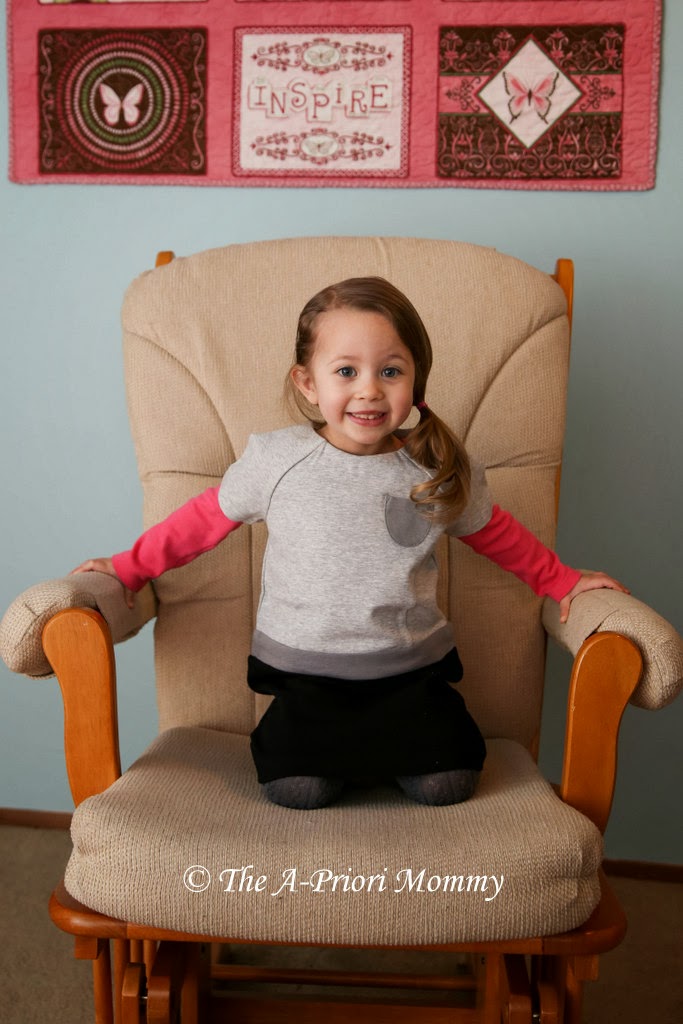 1. WHAT IS YOUR FAVORITE T. V. SHOW? Daniel Tiger

2. WHAT DID YOU HAVE FOR BREAKFAST?  Umm.. Pickles!  (No you didn't)  Tuna sandwich, and bread, and tuna is my favorite (Yes, but what for breakfast this morning?)  Um, um, a smoothie and oatmeal! (Yes, yes you did!)

3. WHAT IS YOUR MIDDLE NAME? Said first and middle name together... claiming it was her first name!  ;)

4. FAVORITE FOOD? Pickles  (When have you ever had pickles??) Tuna sandwich (I'm sensing a theme)

5. WHAT FOOD DO YOU DISLIKE? Pickle juice (Well that's perplexing)

8. WHAT IS YOUR FAVORITE THING TO DO? Watch Daniel Tiger (You sure?)  I like the Party Game its my favorite game in the whole world.

9. IF YOU COULD GO ANYWHERE IN THE WORLD ON VACATION, WHERE WOULD YOU GO? With Uncle Kai and Aunt A (Yes, but where with them?)  to the movie theater.

10. FAVORITE SPORT? I played soccer once with my dad!

12. ARE YOU A MORNING PERSON OR A NIGHT PERSON? A morning girl.

15. WHAT DO YOU WANT TO BE WHEN YOU GROW UP ? I want to be um superhero uh the Green Lantern.  The Marshmellow Hunter.  (That sounds exciting!)

16. WHAT IS YOUR FAVORITE CANDY? Um donuts!  I mean oreos.

17. WHERE IS THE FURTHEST YOU'VE EVER BEEN FROM HOME? In our neighborhood.

18. WHAT IS YOUR FAVORITE BOOK?  Tinkerbell story?  I mean the lion story (She's just listing movies....) The princess!  (That is book.)

20. WHAT IS YOUR FAVORITE MOVIE?  Turbo Fast 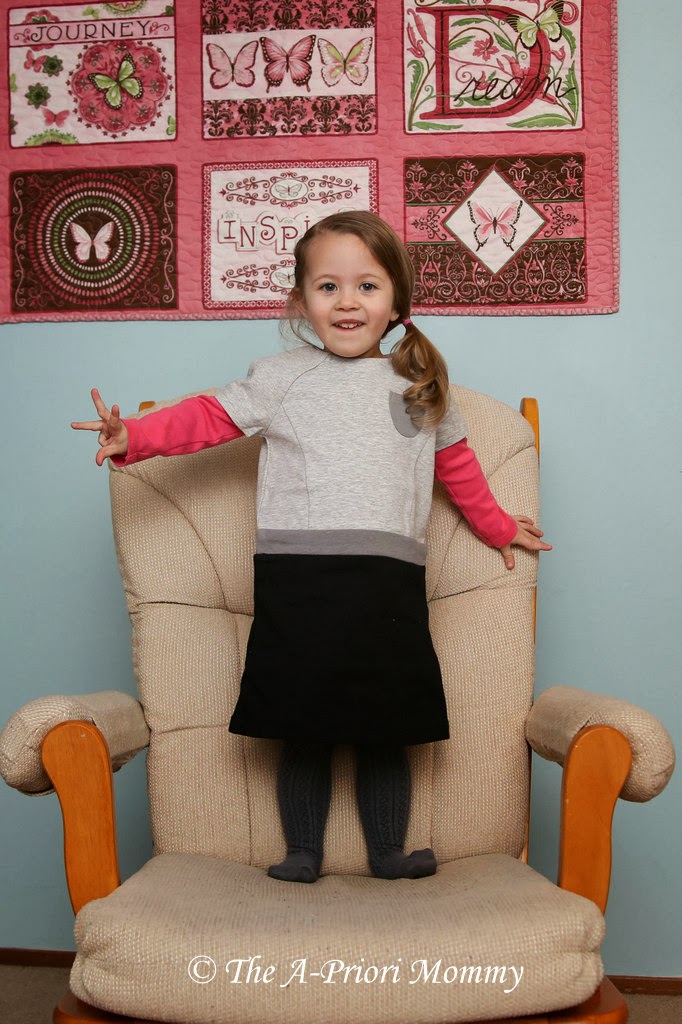 I am a woman saved by God's grace, wife, mommy, attorney by trade, homemaker by choice, who enjoys watching far too much television and clicking the shutter on the camera!

Train up a child in the way he should go; even when he is old he will not depart from it.

In July 2011 my friend Katie was diagnosed with stage four colon cancer. She fought with admirable strength and determination, yet in the end the disease cut her life short and Katie passed away on April 4th, 2013.

May we never forget or let the power Katie infused into the color purple fade from our hearts and memories. Purple Power, Katie!