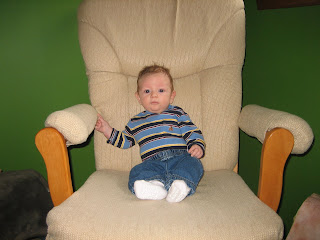 Ace is two months old. It seems like he's always been a part of our family and not that he's only been here for 9 weeks! Already it's hard to imagine how he used to be almost half the size he is now. He's growing into such a little guy, already he's lost his look as a newborn.

Ace's second month of life was warned to be a fussy one, and to some extent that was true. Often in the evenings around 8pm he started to get fussy and on occasion wouldn't stop fussing until we laid him down for actual sleeping. NOT the "routine" we're hoping for. Our doctor warned us that month two with a baby is often more taxing than the first month due to the added fussiness. And although he has been fussy pretty regularly, it hasn't been intolerable, and all we want is to make him happy. Sometimes we let him fuss it out. He's a great baby in many ways, but one of my favorite are his distinctive cries. You know when he's sad versus just plain mad. So although the fussiness can be done without around here, it's not so terrible that either Loving Husband or I feel the need to run down to the garage and scream.

Ace due to the fussiness has been a little less portable for me this month. He doesn't like to take a bottle unless it is very much a specific temperature which is hard to achieve, so often I end up nursing him – and I have my cape, but still is awkward for some people and simply awkward in general to handle. Although twice now while out with Vanessa I've nursed him while standing the baby section of JCPennys. That's skill I say.

We also took 6 week pictures of him, which of course turned out adorable! He was a lot more alert. Stacy joined me on that venture, and she can attest to the fact that Ace was obsessed with something to his left. We're guessing it was the light, but we kept having to turn him so that he'd look at the camera, which didn't happen too often. It was cute though and certainly yielded some great pictures.He took his first long car trip (only about 90 minutes) to visit our friend Brad and Angie at their place. He did wonderfully in the car. He fell asleep for most of the ride there and back. We had a nice time visiting with Brad and Angie and are so glad that they're NW residents now!

Ace also this month has been more interactive with toys, he still doesn't totally understand that he has hands, but is starting to notice things around him more. He has a good attention span when we show him things, he stares at them for a while and then moves onto something he is more interested in (the wall, etc :)) The other day in the car he had his Nemo with him and I normally place it on his legs while we're driving, well he managed to pick Nemo up and hugging it with one arm, causing Nemo's face to be in Ace's face. He wasn't too sure how that happened, but he figured why not and put Nemo in his mouth. It was cute, I had to pull over and watch :)

Musical tastes seem to have started to form in this past week as well. I often sing to him when he is fussy ranging from just about anything from Jesus Loves Me to country songs. This has yielded the discovery that I don't know ANY song in its entirety, ah well. Well a Beach Boys song popped into my head the other day: Kokomo and while singing that he calmed down for a second. So I opened up iTunes and put on the Beach Boys and lo and behold he was instantly calm, and even a little smiley. Loving Husband didn't believe that it was specifically the Beach Boys, so we put on something else that was soothing. Nope, fussy… back to the Beach Boys and calm as could be. So I burned us a cd and we were off to church. I think he's got a bit more of Grandpa in him besides his eyes. :) My dad always loved the Beach Boys. LH said that we had to give him a variety of music and not lock us into a box of always having to listen to the Beach Boys… and so Ace's silly mother started listening to Christmas music on the 20th of October and so he's been enjoying lots of new music. I love Christmas music! It's just makes you so happy. Well, at least me. Humbug to all you Scrooges that think Christmas music should only be played in December. Humbug!

Ace had his two month doctor's appointment today. Besides having a bit of a cold, everything is a-ok. His ears and lungs were clear from any gunk and so the cold should process out of him just fine. He weighs 12.4lbs (65%), he is 24.5" long (94%) which is 2" longer than he was a month ago, and his head is now 39.5cm (39%). Developmentally he is right on track and where he needs to be. He is smiling up a storm and eating very well. He should have had his 2 month vaccinations, but I held off on those since he has a cold. The doctor said it wasn't necessary since he hasn't had a fever at all, but I wanted him to be feeling better in general before they poked him too much. So we'll go back on November 6th to get him all his shots.

Life here is wonderful, Ace is enjoying the fall colors and excitement of the seasons approaching. Every morning he wakes up with a smile and talks to us with his coos and goos. He loves to look at the bright colors in books and looks up at me when he's nursing with the greatest love in his eyes. This coming month will bring us lots of changes and excitement. Ace gets to enjoy his first holiday and oh boy Halloween is such a great holiday to be his first. He also gets to experience (although be totally unaware) his first election. What an exciting time for our little guy. Continue to stay tuned as I continue to make Ace the most photographed baby on the planet. I just can't help it – he's just too darn cute not to document! All our love!!

The average age a baby rolls over is three months. Today, Ace is 41 days old, a solid 6 weeks old and he rolled over from front to back. :) Yep, he’s already ahead of the curve in many ways, and now we’ve got it on film! Loving Husband was adjusting the snaps on his outfit while he laid on this tummy and Ace just flipped right over. I missed it and so LH propped him back on his tummy and Ace did it again… and the third time is the video you can see. Ace also is eager to walk. If you hold him under his arms he will put one foot in front of the other and walk toward you. We only have video of one step though at the moment because he became fussy – when we have more steps, that video will be posted as well.

Other events in the last two weeks include discovering Ace’s affinity toward the color orange. He is infatuated with it – and when you take it out of his eyesight he becomes instantly fussy. This began a week or so ago with a pumpkin. I was at QFC with the stroller and picked up a small round pumpkin and stuck it on the tray. Ace was zoned in on it the entire time it was on the cart… followed it through checkout and as soon as it disappeared into the bag, began to cry. I put it back on the stroller and he was a happy guy again. I thought it was a fluke or simply a bright color… not particularly orange. He’s less than 2 months old why would he already have a favorite color? But it was solidified for me when out to lunch with Vanessa at the mall we were in the Disney store and Ace was looking all around and when we got to Nemo he followed it as I pushed the stroller on by and was craning his neck to see him. I put him in his stroller and he stared at him intently. Needless to say that little $5 Nemo came home with us. So it’s the perfect time of year for my boy who loves the color orange.

Loving Husband’s now fully back into the swing of things with work and is quite happy when he is home and gets to hug his family. Yesterday, Ace had his 6 week pictures and they turned out great! They will be ready on the 18th and I can’t wait for them to be here. Stay tuned for more updates as Ace continues to bust through all those averages and smoke all the other babies in his age group. :)
Posted by AP Mommy at 5:03 PM No comments:

I am a woman saved by God's grace, wife, mommy, attorney by trade, homemaker by choice, who enjoys watching far too much television and clicking the shutter on the camera!

Train up a child in the way he should go; even when he is old he will not depart from it.

In July 2011 my friend Katie was diagnosed with stage four colon cancer. She fought with admirable strength and determination, yet in the end the disease cut her life short and Katie passed away on April 4th, 2013.

May we never forget or let the power Katie infused into the color purple fade from our hearts and memories. Purple Power, Katie!